Solo cabins with zero single supplement available based on availability 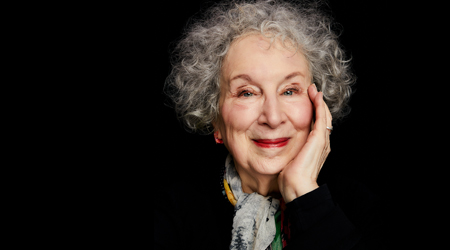 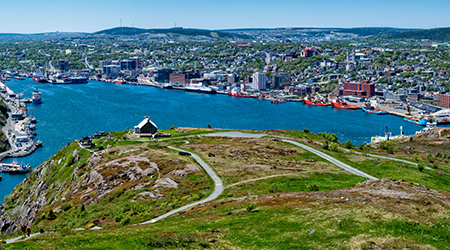 Photo: A view of St. John’s cityscape from the Narrows, the only passage from the Atlantic Ocean to St. John’s Harbour

Expedition Costs Do Not Include:

Explore with Margaret Atwood! Since her childhood spent in the woods of Northern Ontario and Quebec, Margaret has been a passionate conservationist and a tireless advocate for birds. A deep believer in the power of getting people out into nature, Margaret has been travelling as a staff member with Adventure Canada for twenty years. Join her on this voyage of discovery. 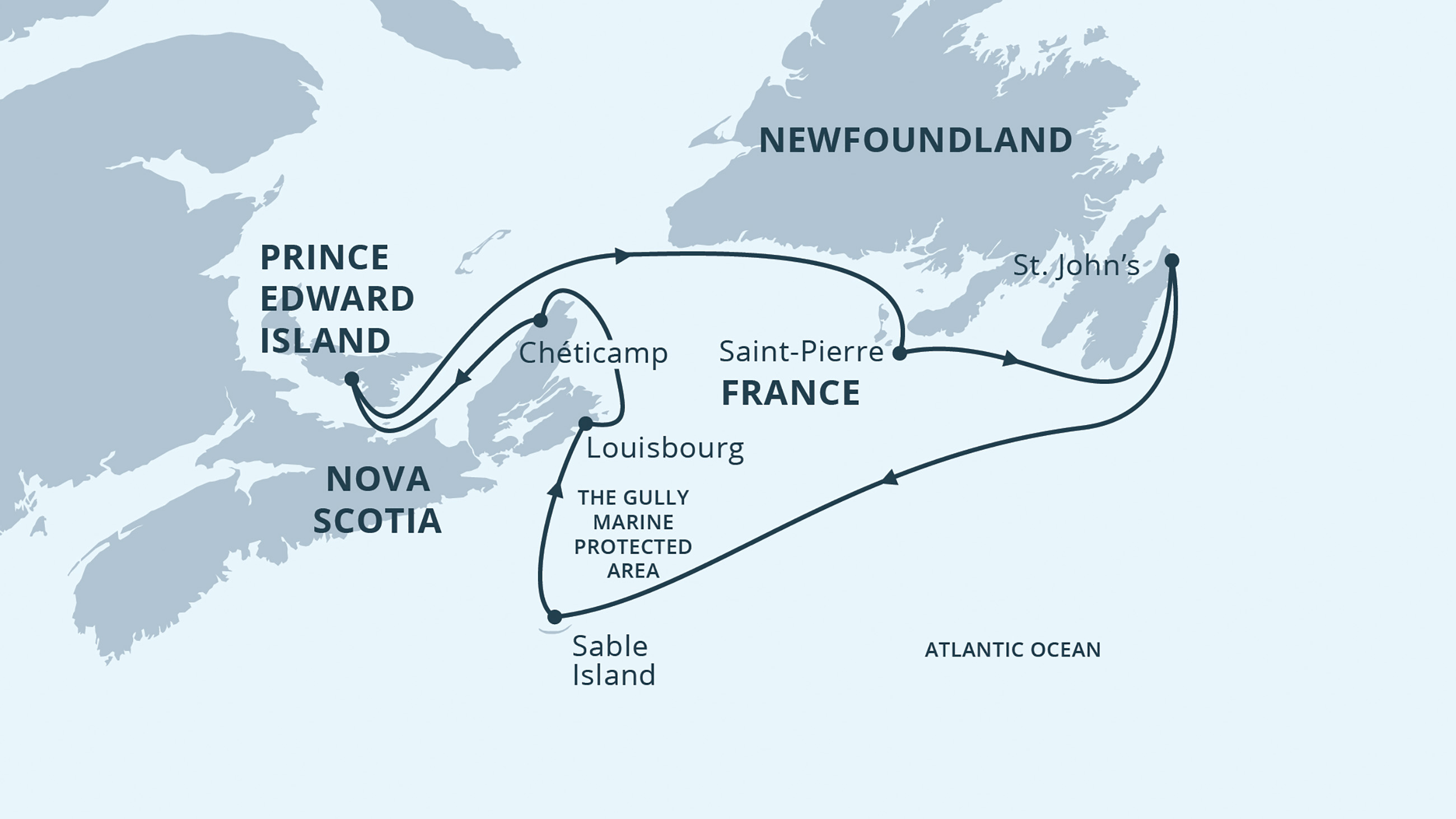 Welcome to St. John’s—the vibrant capital of Newfoundland and Labrador. Sailing out of the historic port, Signal Hill keeps watch as we exit the world-famous narrows. The charming houses of the Battery are always a hit with shutterbugs. Watch for icebergs, whales, and seabirds as we sail!

We’ll be in full-on learning mode as our expedition team shares the fascinating history and ecology of Sable Island. On deck, we’ll be watching for marine mammals and seabirds in the rich waters of the northwest Atlantic.

A sandbar as long as Manhattan—but only about a kilometre wide—Sable Island is home to many varieties of birds, including the Ispwich sparrow, the largest grey seal colony in the world, and the world-famous Sable Island horses. Unique weather conditions prevail at Sable Island. We'll maximize opportunities to walk the dunes, cruise the shores, and view the wildlife. We’ll also learn first-hand about Sable Island’s fascinating human history.

The Gully is a Marine Protected Area where the sea floor plunges two and a half kilometres into a submarine valley. The Gully is one of the most prominent undersea features in eastern Canada. Significant coral communities make for a diversity of both shallow and deep-water fish, which draw whales and dolphins. Join our onboard researchers to appreciate the abundance of marine life! 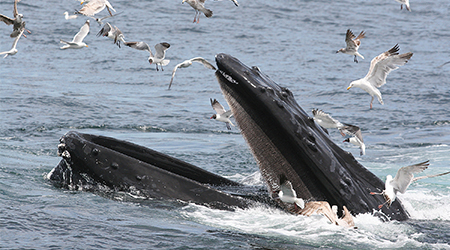 Built by the French in 1720, the fortifications at Louisbourg were captured by the British in 1745, later returned to the French, captured again in 1758, and then destroyed. Reconstructed in the 1960s and 1970s, the Fortress of Louisbourg National Historic Site offers a telling glimpse into military colonial Canada. 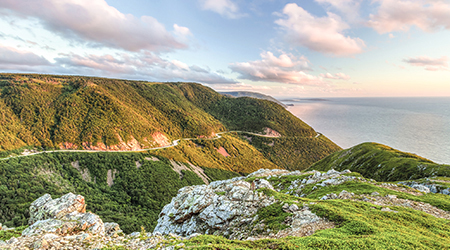 Photo: Scenic view of the coastal mountains in Cape Breton on the seaside

Today we call in at the fishing village of Chéticamp, on the western shore of Cape Breton Island. A busy fishing harbour, rug-hooking museum, shops, and restaurants offer a taste of Acadian heritage. Nearby Cape Breton Highlands National Park is world-renowned for scenery and wildlife. If weather permits, we’ll hike the spectacular Skyline Trail.

Historic Charlottetown, Prince Edward Island is known as the birthplace of Confederation. A charming town and the capital of Canada’s smallest province, Charlottetown offers access to all of PEI within a relatively short drive. Optional excursions will include a visit to Green Gables—fictional home of the famous Anne— and Lennox Island First Nation.

The wild and windswept coast of southern Newfoundland is home to a few remaining outport communities. Visits here are often a highlight of our trips. There are many choices of unique bays and coves to explore via Zodiac or land excursions. Along the coast, the geology is outstanding, and the plant life is gorgeous. We’ll be on the watch for wildlife, too. We’ll make the most of every chance to explore this beautiful and remote coast.

Just off the shores of Newfoundland lie the islands of Saint-Pierre and Miquelon—an official territory of France. The colourful town of Saint-Pierre makes a charming finale to our trip. Winding streets with shops, houses, and cafés bring a taste of Europe to the east coast of North America.

On the final day of our expedition, we sail back though the picturesque Narrows and into St. John’s harbour. We will say our farewells in North America's oldest city. 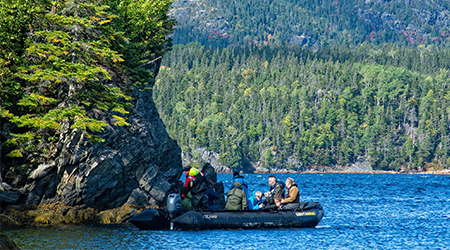 Photo: A Zodiac ride along the south coast of Newfoundland's rugged coastlines

Qajaq (Kayak) with Us

Adventure Canada’s Qajaq program provides a quiet, fun and relaxing way to reconnect with the marine environment. The Qajaq (the proper phonetic spelling of “kayak”) was invented by Inuit and is a feat of engineering whose design remains unchanged after thousands of years. Join us in a unique way through our qajaq program. Kayaking has become an increasingly popular mode of exploration. Paddling in pristine waters, near marine life, in the wilderness, or along a historic coast will overwhelm even the most seasoned adventurer. It is a rare opportunity, for few have experienced these magical places by qajaq. We offer safe, fun and unforgettable moments at water level. Limited space is available. Please book in advance, prior to departure, to avoid disappointment!

Adventure Canada is an award winning Canadian tour operator known for taking travellers to remote regions of the planet. Let's celebrate Canada together with Canadian Icon Margaret Atwood in 2022!

We engage, entertain, and educate by connecting people to each other and the land through innovative travel experiences. We cultivate connection and community. We celebrate culture. We are driven by heart, humanity, and hope. We can be the company that does expedition cruising the best, but we can also be the company that does it for the best reasons.

Enquire for the offer now!

FacebookTwitterEmail
* This offer is subject to availability and can be withdrawn or varied without notice.